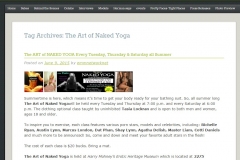 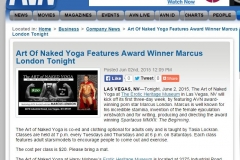 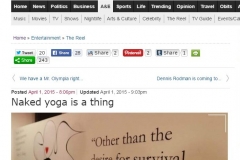 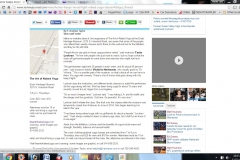 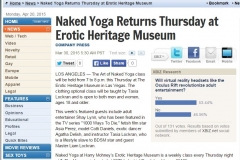 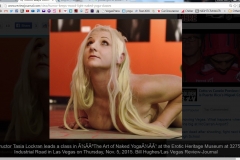 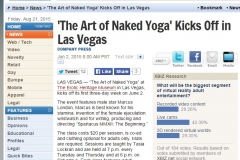 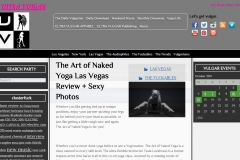 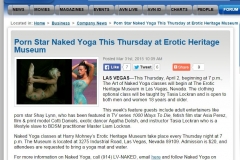 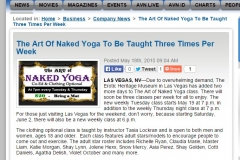 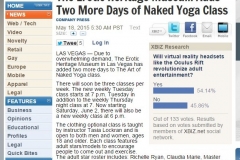 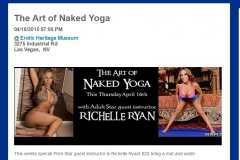 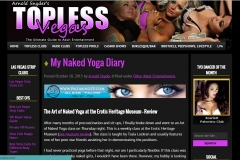 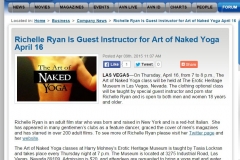 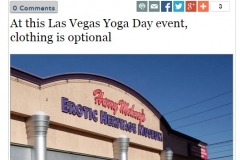 “People like to see girls in those yoga postions naked,” said instructor Tasia Lockran. “I’m fine with people who just want to watch, but my hope is that the class will get some people to come down and exercise who might not have normally.”

“We get between eight and 20 people in each week, and it’s about 90 percent men,” said museum director Victoria Hartmann, who usually goes by “Dr. Victoria.” “It’s in a smaller part of the museum, so that’s about all we can have in there. It’s yoga with comedy. There’s a lot of humor that goes along with it to keep it light.”

“It’s so much cheaper here,” Lockran said. “I was hating L.A. and the traffic and the danger and the gunshots. Out here, it’s peaceful. It’s very nice.”

Lockran didn’t initiate the class. She took over the classes after the museum was temporarily closed from February to June of 2014. She began teaching it in March this year.

“I had been doing naked yoga with my girlfriends for about a decade,” Lockran said. “I had always wanted to teach a naked yoga class, but I didn’t even know if it was legal.”

Aside from the titillation, Lockran said the benefits of yoga include improved strength, flexibility, balance and sexual health.

The coed, clothing-optional yoga classes are scheduled from 7 to 8 p.m. Thursdays and cost $20 for men and $10 for women. Attendees must be 18 or older and should bring a yoga mat, or mats can be purchased at the class. No cellphones are allowed in the class.

Posted October 10, 2015 by Arnold Snyder & filed under Other Adult Entertainment.

I had never practiced yoga before that night, nor am I particularly flexible. If this class was not being taught by naked girls, I wouldn’t have been there. However, my hobby is looking at naked girls and naked girls doing yoga sounded interesting—and was something I’d never seen before.

Plus, as the Art of Naked Yoga is a weekly event in Las Vegas, I was getting emails asking me about the class and whether I thought it was worth it.

It’s a dirty job, but somebody’s gotta do it. And Tasia assured me that the class is clothing optional—nobody has to get naked—and that no yoga experience is necessary.

The class was held in one of the museum’s upstairs rooms. Eight guys had shown up for the class and Tasia was accompanied by adult film actress Shay Golden.

There were eight guys there for the class and we weren’t in the room more than ten seconds when both Tasia and Shay were standing there buck naked, waiting for us guys to get our clothes off and our yoga mats spread out.

I had a plan. If there was even one other person in the class who didn’t get naked, I wouldn’t get naked. Though I love looking at naked girls, I generally prefer to keep my own clothes on in public. But I didn’t want to be the only clothed person in the room because that would be too weird.

So, of course, everyone got naked, and so did I. There’s something about two naked girls in a room saying okay everybody let’s get naked that just makes you want to conform.

I know most of my readers come to this website to get info about the Vegas strip clubs, so how does this naked yoga class differ from the strip club experience?

First, the audience doesn’t get undressed in a strip club, so that’s weird.

Second, there’s no drinking and no loud music in a yoga class.

Third, the lights are on.

Fourth, there are two naked girls in front of you who stay naked for the entire hour of the class.

Fifth, they don’t dance, they pose.

Tasia is aware that some guys may not be there to do yoga so much as to see naked girls doing yoga. So, after demonstrating a position with her legs spread and/or her pussy thrust out, she’ll say, “It looks much better if I turn this way,” then she’ll do the same position so that we get the full pussy view.

Needless to say, both Tasia and Shay are uninhibited women. They’re both beautiful as well. Shay seemed to enjoy getting into the most brazen poses at Tasia’s urging. These girls are perverts and proud of it. (And the more I think about it, the more I think a weekly naked yoga class might be just what I need to get my deteriorating bod into shape…)

Watching girls doing naked yoga also differs from watching strippers in that in the yoga class, they hold the poses, often for an ungodly long time. Ungodly, that is, if you’re attempting to do the poses yourself (not ungodly long if you’re watching). Many of the positions I just looked at and knew without even trying that my body wouldn’t bend that way. I did give every position the old college try, just to see how close I could get.

But I never minded when I had to give it up after a few seconds and just stare at the gorgeous nude babes in front of me. They’re both really flexible, way more flexible than most strip club dancers.

Pro Tip: It’s a small room, so there are no “bad seats,” but if you put your yoga mat up front, you’ll just be looking at the girls—a few feet in front of you at most–with no dudes’ hairy asses in Down Dog position to obstruct your view.

Tasia and Shay kept up a running dialogue throughout the class, talking about everything from slasher films to how to massage your prostate. If naked standup comedy ever becomes popular, these two may discover yet another career opportunity.

You may be wondering what the interaction was like between the students in the class. There wasn’t much. Most of us limited our interaction to joking with Tasia and Shay. The class members ranged in age from their early 20s to late 60s, with a wide range of fitness levels. Nobody could do all of the poses that Tasia and Shay could do. I felt noticeably loosened up after the class. Yoga might actually be healthy. I would definitely consider doing the class again.

Bring a yoga mat and water. For more info, see the Art of Naked Yoga website.

Whether you like getting tied up in unique positions, enjoy your partner pushing your legs as far behind you’re your head as possible, or just like getting a little rough now and again, The Art of Naked Yoga is for you!

More naked yoga after the jump.

Naked yoga is a thing

Men are always telling Vegas yoga instructors they should teach naked yoga, because men are men. (Although, some women also like the idea, this is true.)